Today I'm just going to show some pictures and short commentary about what I consider are the most unique or interesting sealing rooms in Temples of The Church of Jesus Christ of Latter-day Saints.  These rooms are used for temple marriages where a man and woman are married for time and all eternity and where children can be sealed to them for eternity.

The St. George Utah Temple has a number of unique sealing rooms.  One is up a small staircase in the celestial room (in the tower).  Most of the sealing rooms are on an upper floor and have a single round window going into each room.  To me, the round window just makes the room feel unique.

The original Logan Utah Temple interior had a sealing room (shown to the left) with gold leafed walls and a stained glass window.  It is extremely unfortunate that when the temple was remodeled the room and wall covering was lost.  I think the gold leaf was lost because it was applied to plaster walls and so it couldn't be removed and brought to the new temple (I know that is what happened to at least most of the Logan Temple murals).


The Manti Utah Temple has many wonderful ornate sealing rooms.  My favorite is a small one off the celestial room (that isn't used any more).  I've been told that this room was the Holy of Holies until the Salt Lake Temple was completed.  Then it was a sealing room for decades.  Apparently President Hinckley wanted to preserve the room and thought it was extra special so he had the room stop being used for sealings.  This could be a rumor, although I think it was a sealer that told me this.  The room is beautiful with an arched ceiling and intricate gold patterns and detailed woodwork.  The door is left open, but roped off so you can see it but not go all the way in now.  It is also very small, with maybe room for 5 or 10 people to witness the sealing.

The Salt Lake Temple has many nice sealing rooms.  Originally it just had 3 sealing rooms.  Two were on either side of the Holy of Holies, just off the celestial room.  The last was up a small staircase on the east side of the celestial room.  The intricate craftsmanship in these rooms is wonderful to see.  The sealing rooms flanking the Holy of Holies have stained glass windows.  Still, my favorite of the three is at the top of the stairs off the celestial room, in the east center tower of the temple.  I love that the staircase leading to this room has a cupid statue on the bottom rail post.  This is a fitting symbol for the room where a man and a woman are married for time and all eternity.  These rooms definitely are unique.

The Cardston Alberta Canada Temple is the first temple I know of with dark wood sealing rooms.  This temple used extensive woodwork with intricate inlays using woods imported from around the world.  As you progress in the temple the wood becomes more expensive, lush, an more intricately inlaid.  This means that the celestial room is covered in really nice dark woods.  The sealing rooms also end up dark with really involved inlays. I like this.  It is so different from the usual white sealing room, while still being nice.
I know of only one other temple with dark woodwork in the sealing rooms.  This is the Oakland California Temple.  At least one (although not all) of the Oakland Temple sealing rooms is done in dark wood as seen in the picture below.  I like the dark wood and think it would contrast nicely with the white clothing worn in the temple.  I also like how here the altar glows in a bright contrast to the darker walls.
I have not been in any of the dark wood sealing rooms.  If any of you have, please comment and tell us what they are like and what you think of them.  Also, if you know of any dark wood sealing rooms that I haven't mentioned, please write and let us know about them.

I was going to write about barrel vaulted ceiling rooms, which would also include the Las Vegas Nevada Temple sealing rooms, but I decided to just focus on the best of the group.  The San Antonio Texas Temple sealing room with a stained glass window of the tree of life is inspiring.  The brightness and whiteness of the room seems to be enhanced by the colors of the tree of life window.  Utah artist Tom Holdman did the stained glass windows for the entire temple and did a wonderful job in my opinion. 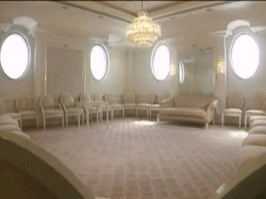 Excellent post...some of the sealing rooms are just stunning. It would be a wonderful experience to be sealed as a couple and a family in such a room.

You may be interested to know that the sealing room you featured from the Washington DC Temple has been redecorated and is now in a creamy yellow color, with no reflective wallpaper. Went out of fashion, I guess.

I also question your assertion that the Salt Lake Temple originally had three sealing rooms. If I'm remembering my Talmage correctly, there were just two sealing rooms, on either side of the Holy of Holies entrance.

Don,
I should go check out the Talmage book again, but if I recall correctly the third sealing room was always one of the original ones (and is certainly not a part of the annex). The third sealing room is up the stairs next to the sealing room on the left of the Holy of Holies and is in the center east tower. The craftsmanship is clearly pioneer and not 60's addition.
I'm sorry to hear that they didn't like the D.C. sealing room wallpaper. Are you sure there aren't more than one oval sealing room and the yellow wallpaper wasn't just in another sealing room? It is sad when we cover history, especially good history - like painting the fine woodwork in the Salt Lake Temple white and cream.

There is more than one sealing room in DC, but the whole temple has been redecorated pretty substantially, including the sealing rooms. There's actually been a lot of ornamentation added on, since the 1970s style was quite simple. An example is the baptismal font. A green and gold design has been added around it, and a faux stone design has been painted on the walls. The simple, white font on a dark blue floor is no longer there.

There are 10-12 other small sealing rooms on the floor, accessed by two long hallways which run parallel down either side of the floor. These sealing rooms have traditional rectangular or square altars (depending on the size of the room) which are more convenient for child-parent sealings (as it's hard to coordinate a parent-children sealing around an oval altar).

In the Salt Lake Temple: In the original Temple there were the two sealing rooms on either side of the Holy of Holies as per Scott PLUS (now three) two sealing rooms in the central east tower. The sealing room now up the stairs from the celestial room was originally an office (the recorder's office). It now becomes the third of three sealing rooms stacked one-on-top of the other in that tower. The top two are regularly used, but I've not witnessed the bottom one used (it is difficult to get to without disrupting a session). There is also a very tiny sealing room straight across the main hall from the entrance to the creation room (just off the passage that leads to the mens side of the baptistry).

That makes sense. I knew the room was always at the top of the stairs but didn't realize it was originally a recorder's office.

Scott, a friend has asked me to create a piece of healing artwork for a widow who was married in the Washington DC sealing room. Since they were married in the 50s, I have the difficult task of finding a hi res photo of that room, with a view of the mirrors, integral to the belief in spending one's Eternal Life together. Is there any possibility you can send me the hi res photo to nancy.gershman@rcn.com? I would be indebted. N

I don't have a higher resolution photo. I know a photo was published in the Ensign at one point, but I don't remember the issue. Probably 30 years ago.

I attended a wedding in the middle level sealing room of the East tower in 1992. We were required by the Temple to be in white. The couple had not requested an 'all white' ceremony. We accessed the room through the 'Old Sealing Office' (now used by the shift coordinators I think) then behind the Holy of Holies, down the stairs behind the large south-east door and in to the sealing room. I think everyone was shocked at the size of the room. The men stood behind the chairs so the women could sit.

The sealer told us the room had originally been the office of Lorenzo Snow when he was the temple president. After he became the Prophet, the office was converted to a sealing room.

I always find it interesting the rumors and stories that are told about the temple. Working at the Salt Lake temple i was able to hear MANY of them. Most of which are not true by any means. Talmage does say the temple only had two sealing rooms and this is true. The one at the top of the stairs was the Temple Presidents office as i believe Talmage also said in his book. Also the room that was Snow's office is now where the Elevator is. The room was turned into an elevator during the 1960's addition, that was also the same time the round Tiffany stained glass window of Adam and Eve being expelled was moved to where it is now. Most of these stories and facts are stored with the temple recorder and can be found if one just asks.

We were married in Jan. 1977 and were probably one of the last couples to be sealed in the small room in the Manti Temple. It is a beautiful room and we treasure it.

Exellent pictures. I wish you could post a picture of the Hong Kong China temple sealing room. Oh well, Logan is very pretty. I wonder what Payson will look like.

Do you know the beautiful Manti Sealing room is way too pretty. I'm serious. It's really pretty.

What is the Sealing room at the bottom of the page? I just want to know. Maybe Seoul Korea.

Where is the alterin the Hong Kong sealing room picture?