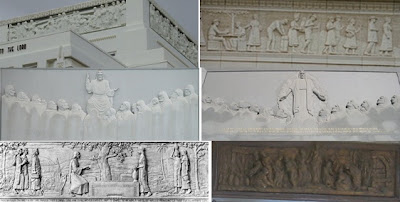 This entry is about temple sculptures other than Angel Moroni statues or other statues.  There are or rather were 2 other statues I know of on one temple.   If you know what I’m talking about, feel free to post a comment.  Either way  I’ll get to that in another blog post about statues on temples and on temple grounds.  For this post I’, focusing on Friezes or bas-relief or any type of relief sculpture for that matter.  Although Nauvoo, Salt Lake and many other temples have sculptures of suns, moons, stars, trumpets, clouds, constellations, earths, tree of lifes, flowers, etc., this post isn’t about them.  I’m writing today about the Laie Hawaii Temple, Mesa Arizona Temple, Oakland California Temple, Newport Beach California Temple and the Cardston Alberta Temple although it is a little different.

The first temple relief sculpture was on the Laie Hawaii Temple in 1919.  On the four sides of the temple there are friezes that are relief sculpture planned by J. Leo Fairbanks and  built by him and Avard Fairbanks, his brother.  These depict Christ in 4 dispensations, or perhaps more accurately in 4 scriptural periods.  These are:

If you live in (or visit) Utah you can see smaller bronze copies of these sculptures (by another artist, I can’t find his name but it was one of the big latter-day saint names, like Knaphus) in the lobby of the new Church History Museum.  During the recent renovation of the Laie Temple they added a waiting room with copies of the sculptures so patrons inside the temple could appreciate the scenes and not just those outside.

The next relief sculpture was at the Cardston Alberta Canada Temple in 1923.  I say “at” because I don’t think this relief is actually on the temple but just the grounds, although I am unsure.  It was originally in front of a pool which has since been removed.  The sculpture by Torlief Knaphus depicts Jesus Christ talking to the woman at the well and even quotes scripture.  If you live in Utah you can see a plaster casting of this sculpture in the lobby of the Provo Utah Temple (with added color!).

With the previous 2 temples including relief sculptures, a relief frieze was included on the Mesa Arizona Temple in 1927.  This sculpture, also by Torlief Knaphus includes 8 panels, 2 on each corner of the temple, depicting the gathering of Israel from the 4 corners of the earth.  The panels depict gathering scenes of:

The Mesa Temple also has a lion head on the east side by the baptistery entrance.  It is a fountain.

After the Mesa Temple it took 37 years before the Oakland California Temple included relief sculptures in 1964.  It has a sculpture of Jesus teaching the people in and around Jerusalem during his mortal ministry on the north side of the temple.  On the south side of the temple there is a sculpture of Jesus Christ appearing to the Nephites in the Americas after his resurrection.  I can’t seem to find out who sculpted these scenes, but if you know please tell us in the comments on this post.  This temple also has tree of life sculptures, but they are more of an architectural detail so I might discuss them in a later post.

Most websites and articles say that the Oakland Temple is the last with relief sculptures, but they are simply wrong.  The Newport Beach California Temple built in 2005 has a relief sculpture of Christ appearing to 10 of the 12 apostles after his resurrection.  The sculpture looks like bronze and is above the front doors.  Although smaller than the other sculptures in this article, it is a welcome return to relief sculptures and I hope we see more scenes on new temples.  I don’t know who sculpted the Newport Beach Temple frieze and would really like to know.  LeRoy Transfield sculpted this beautiful sculpture.  If you know any information on this PLEASE COMMENT.

So there you have my discussion of relief sculpture on Latter-day Saint temples.  We have scriptural scenes (Laie Hawaii, Cardston Alberta, Oakland California and Newport Beach) and latter-day gathering (Mesa Arizona) represented in these fascinating works of art.

If you know of any other temple sculptures (not statues, I’ll deal with them later) please tell us in comments.

-The following is an addition to the original post
I noticed that although the Winter Quarters Nebraska Temple doesn't have relief sculptures on it (unless you count the doors), the grounds are shared with a pioneer cemetery with some nice relief sculptures of Christ, etc. in a style I really like.
Posted by Scott at 4:10 PM 9 comments: Links to this post

Wow, I have not written on this blog in a long while. This is mainly because nobody ever commented on my posts. So please comment on my posts and if you like the content in this blog, link it to your web pages/ blogs, it helps get more readers here.

So today's post is about Angel Moroni statues. The Angel Moroni was an angel who appeared to Joseph Smith Jr., founder of The Church of Jesus Christ of Latter-day Saints (commonly referred to as the Mormon or LDS church).  To quickly summarize, the angel gave Joseph Smith the record that The Book of Mormon is translated from  For a complete account click here.  Verses 30 on in particular deal with the Angel Moroni.  These statues are on most Latter-day Saint temples as a symbol that revelation still exists, the gospel of Jesus Christ has been restored, and of the angel mentioned in Rev 14:6.  Eight temples don't Angel Moroni statues because they lack a spire (Laie Hawaii, Cardston Alberta Canada, Mesa Arizona) or because they were built before the statues were traditional (St. George Utah, Logan Utah, Manti Utah, Hamilton New Zealand, Oakland California). Originally the Idaho Falls Idaho, Bern Switzerland, London England, Ogden Utah, Provo Utah, Sao Paulo Brazil, Tokyo Japan, and Freiburg Germany Temples lacked statues, but have since had them added. The Boston Massachusetts Temple and Manhattan New York Temple both had spires added shortly after their dedications (due to a court case for Boston).

The image at the top of this post shows 5 Moroni statues and a proto-Moroni weather vane. This shows some of the diversity in Moroni statue design. The first picture shows how the angel weather vane on the Nauvoo Temple would have originally looked. This was the only flying angel statue on a temple and wasn't specified as Moroni. Notice that he is holding a book and not gold plated. This may imply that he was a general angel and not Moroni specifically, or that he was someone such as Joseph Smith (as one institute teacher of mine theorized). Regardless of the intended identity, this weather vane represented the angel in Revelation 14:6

The next temple with an angel was the Salt Lake Temple. Originally it was planned to have 2 angel weather vanes (Nauvoo style) with one on the east center tower and one on the west center tower (scroll down in the link for the drawing). By the time the temple was completed 40 years later in 1893, styles had changed and statues were more common on the tops of buildings (think U.S. capitol building). So Cyrus E. Dallin was commissioned to make a standing angel statue, now identified as Moroni. This is the second picture on the image above (from the left).

As all temples began to include Angel Moroni statues several styles have been used. When the small temples first began to be built, the Monticello Temple was given a white Angel Moroni statue holding a trumpet and a scroll. Unfortunately the white statue disappeared in the clouds so it was replaced with a gold leafed one shortly thereafter and now all Moroni statues are gold leafed. Five temples have Moroni with a scroll (5th from left in picture). These are the Anchorage Alaska, Bismarck North Dakota, Columbus Ohio, Kona Hawaii, and Caracas Venezuela Temples.

It should also be noted that Angel Moroni statues are not exclusive to Temples. The Washington D. C. ward chapel had a replica of the Salt Lake Temple Moroni sculpted by Torlief Knaphus (this replica is now in the Church Museum of History and art and castings of it were added to the Idaho Falls Idaho Temple and Atlanta Georgia Temple (since replaced)).  The Hill Cumorah Monument (far right in picture) also has a Moroni Statue without a trumpet, but with gold plates (and a beard!).

I also want to note that there is a lot of lore about Angel Moroni statues having to face east. This simply isn't true. While most do, because many (not all) temples face east, at least the following do not face east: Seattle Washington (west), Dallas Texas (South), Nauvoo Illinois (West), Spokane Washington (West, although originally East), Taipei Taiwan (West), and Manhattan New York (Southwest).

Thank you for reading this post. I hope you've learned something. Please post a comment to encourage me to keep this blog up to date. Also if you know any interesting Angel Moroni Statue trivia, please comment.

Due to comments I am adding the following:

Well there have been 5 sculptors (6 if you count LaVar Wallgren as distinct from Quilter). Read Ensign Jan 2010 article

The sculptors and corresponding Angel Moroni statues are:

Torlief Knaphus - SL replica for D.C. Chapel, hollow Aluminum (now in the Church Museum of History and Art). Fiberglass castings of this statue by LaVar Wallgren were placed on the Atlanta Georgia (later replaced) and Idaho Falls Temples. Knaphus Also did the Hill Cumorah Moroni (10'4" bronze) He also helped Avard Fairbanks do the Laie Hawaii Temple Font and he sculpted the oxen for the Cardston Alberta, Mesa Arizona and Idaho Falls Temple Fonts.

Karl Quilter - 1978 commission for a 10ft and 7ft Moroni. The originals were then cast in fiberglass by LaVar Wallgren and used on many temples. Quilter got a 1998 commission to make a 6'10" Moroni for small temples. Although the article doesn't mention it, he would have had to have made the Moroni w/ scroll used on 5 temples and then the Moroni w/ open hand used on all future temples. Fiberglass castings of these are used on many temples. Over 100 Karl Quilter/LaVar Wallgren Moroni statues are on temples. Quilter also made L.A. font oxen. Wallgren makes Moroni statues in his Kearns, UT studio.

LaVar Wallgren has generally worked with Karl Quilter and may be considered a sixth sculptor of Angel Moroni statues.  He did a casting of the Washington D.C. Chapel Angel Moroni statue that was used on the Atlanta Georgia Temple for a while and may have done other statues without Quilter, although I am not certain if Quilter was or was not involved with Wallgren on all of Wallgren's Mornoni statues.

Addition to the original post (added 18 March 2011)
Here are articles on Angel Moroni statues if you want to read more here and here:
Posted by Scott at 11:04 AM 28 comments: Links to this post