I have written a lot about murals in the past, but as I was attending the Salt Lake Temple last weekend it occurred to me that I could write more in detail about some.  So I am starting a set of posts on World Rooms in The Church of Jesus Christ of Latter-day Saints' Temples.

World Rooms are very interesting because they have to both show the fallen state of this world while at the same time indicating the progression of man through the temple and through mortality.  The tension between these two ideas, falling and progression, makes for interesting art and architecture.  In the Salt Lake Temple, this is accomplished in several ways.

As you enter the World Room you are now one floor higher than the Garden Room, having ascended most of the Grand Staircase.  There is also now natural light from windows on the left side of the room.  The ceiling is also higher than it was in the Garden Room and the chandeliers are larger and more ornate.  Moldings are more intricate and doors are taller.  All of these elements signify progression.  But this room also is used to represent a fallen world.  This is mainly done through the fine mural adorning its walls.

The main theme of this mural is competition and decay.  It must have been interesting for the artist to brainstorm ways to repeat these themes over and over again.  We can start with the geological components.  At the front of the room there is a large cliff that was been eroded by a river.  A desert occurs on the right wall towards the back.  A storm rages in the back right corner.  A rocky mountain covers the rear wall.  On the left wall there is a swamp with its filthy water.  Also on this wall, there is a tropical scene complete with waterfalls cutting through the landscape.  Distant mountains are also seen throughout the painting showing rugged terrain in contrast to the Garden Rooms gentle scene.

The plants further reinforce the mural's themes.  At the cliff in the front of the room plants have been completely removed by the erosive forces of a river.  Some that remain on the bottom are bent awkwardly either by wind or want of light.  On the right wall there are two trees competing for the same space, choking each other out.    On the left wall parasitic vines are climbing on tress in the swamp.  In the front left corner there is a tree that has some healthy branches, some diseased and dying branches, and some dead branches.  In the right back corner there is a completely dead tree and another tree with some major branches missing.  There is also desert with scraggly plants.  Barren cliffs are on one wall.  There is also a tropical forest on the left wall, which would be nice if it weren't for the creatures living in it. 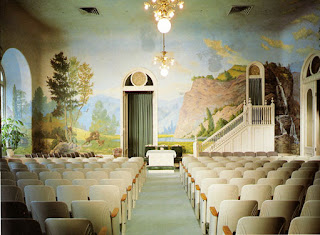 Speaking of creatures, the mural gets more interesting when you consider the animals depicted in it.  At the front we see lions fighting with each other in contrast to the lamb and lion lying down together in the Garden Room.  In fact, whereas in the Garden Room the animals all seemed to be peacefully grazing, in this room they are running, hiding, fighting, eating others, being eaten, starving, competing, etc.  There are two different birds in the partially dying tree that don't seem to like each other at the front.  On the right wall, some sort of cat (bobcat? lynx?) is waiting in the trees, not sure whether to pounch on two bears, or flee from them.  At the rear we see an elk, with large antlers both for defense and for quarreling with other elk.  In the left rear corner there is a hawk flying back to its nest, which would be nice if it wasn't holding a small animal (rabbit?) in its talons.  On the left wall there is some large jungle cat rather enthusiastically eating its prey.  These are just the animals I noticed in the mural last week.  They remind us that competition, violence, etc. are part of this fallen world.  Through the teachings of the temple, we learn how to follow God's laws and overcome all these fallen aspects of life.

The mural shows the decay of this fallen world, but the mural also shows progression in several ways.  The vistas are grander than in the Garden Room.  The colors used are also lighter than in the Garden room.  The entire room is larger, so the mural is also larger.  It is also interesting that the World Room doesn't feel dark, despite all the decay and death it is showing, but it does make you feel like you need to do what you need to do and then more on to greater things.

The mural also works with the room to highlight parts of the endowment ceremony.  You might notice how the stream eroded cliff at the front works with a large staircase.  This staircase allows certain characters to enter and exit the room high up, while another enters through the door at floor level.  The two doors are kept vertically apart, highlighting the difference in the characters.  I won't explain more outside the temple, but it should be obvious to the initiated what I am talking about.  The door to the Terrestrial Room is also slightly elevated showing our progression from this fallen world to a better world where we keep God's commandments and the covenants we have made.

Those are my thoughts on the Salt Lake Temple World Room and especially its mural.  Please comment with other things you noticed in it.

As a piece of fun trivia, if you look at the wall between the doors to the Terrestrial Room and the large staircase you can see an inscription by artists that touched up the murals during the depression (thanks to the commenter who pointed this out).

The murals in the world room are original during the depression (by permission of the President of the Church)as part of some skilled peoples welfare contribution the murals were touched up and the user signed his name.

I am delighted to hear that the world room murals are original. That means that the only murals that aren't are the creation room murals, as that room originally didn't have murals.

Great post. I look forward to studying these details more closely on my next visit.

Regarding Scott's comment: I know the Garden Room murals shown in the original publication of The House of the Lord look quite different from what is there now, so I believe they have at least been significantly "touched up" since the originals were painted.

Do you have more photographs of the World Room mural? I don't see the dinosaurs on the one you have posted. Want to see them as our kids are questioning the species depicted.

No dinosaurs in salt lake temple