I haven't written on this blog for years, mainly because I exhausted my ideas for new posts and also because I got married and had children and that has kept me quite busy and satisfied. But I still retain my love for temples and great temple architecture. I truly miss attending the temple due to the coronavirus limiting who can attend and hope I can go again soon.

During the last few years I've been thrilled to see remodels of temples with historical preservation highlighted. President Nelson's announcement that the 4 pioneer temples will be renovated/restored to preserve their unique pioneer craftsmanship and character made me very happy. The Church of Jesus Christ of Latter-day Saints has shown some renderings of the Salt Lake Temple renovation and I am pleased to see the original colors, woodwork, etc returning to this temple. So far we haven't seen renderings of the baptistery, terrestrial room, celestial room, sealing rooms, holy of holies, assembly room, administration rooms, etc and that has got me wondering how the celestial room might be renovated. So I looked through old black and white photos of the celestial room and compared those to more recent color photos of the celestial room. Here are two of those photos: 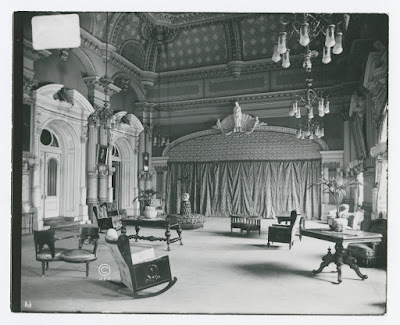 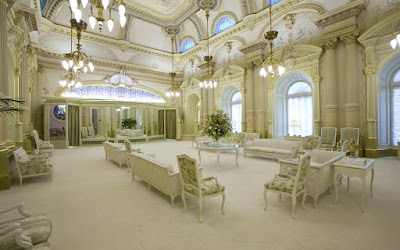 I was looking at these photos noticing a bunch of differences. The base of columns was originally a painted faux marble (the Saints podcast pointed this out), the lower portion of the columns had an interesting four pointed star sort of pattern, sconces were attached to the columns, there was a patterned wallpaper on the vaulted portion of the ceiling, the walls weren't white or cream, only the doors and their moldings appear white. Then I noticed the stained glass windows. As far as I can tell, none of the stained glass windows in the celestial room are original.

The most obvious one is the stained glass window above the veil. It appears to have been added after the black and white photo was taken (1911 or 1912). Then I looked closer and noticed that the 8 semi-elliptical stained glass windows above the doors in the vaulted portions of the ceiling also appear to be missing in the black and white photo. The semi-elliptical space where the windows were added appears to just be wall originally. I suppose there may have been some on the other side of the room, but I haven't found photos to support that. I tried to find some information on when these were added, but I didn't find anything. I'm guessing these windows were added in the 1960s when the celestial room was repainted and the temple was renovated. These windows are a little peculiar because they tilt out. If you look carefully in other photos or when you are in the celestial room you can see that at least the interior windows have a gap at the top. I'm guessing these might actually have been added to conceal air conditioning vents, which i appreciate. These windows must have been carefully chosen because they seamlessly blend in with the original temple architecture so well that most people would have to carefully study old photos to realize they aren't from the 1890s.

I love having the pioneer temples preserved and restored. I hope respectful additions such as these stained glass windows in the celestial room are also kept in the renovated temple. I'd be surprised if they removed these for historical purposes as they appear to match other original art glass windows and enhance the incredible architecture of the Salt Lake Temple celestial room. If you look at the rendering of the grand staircase and hallway that the church has released and compare it to historical photos, it appears that they are adding a stained glass window on the landing of the grand staircase. That window is a similar style to these and makes me think they are keeping tasteful additions to the building. I like that.

Welcome Back. So, knowing full well that until it is completely finished, nothing on the renovation released so far is technically final, I would mention that the full color cut-away they released initially does show that the stained glass above the veil is in place still. They also said that they would be releasing more interior renders in time. I would hope they do that soon, and that the celestial room is included in those renders. So far the released renders show minimal changes to the rooms. Trim work is going from white to original colors, and the grand staircase is going from beige to a more original green color (it is my understanding that the color is intended to be original anyway.) That all makes me rather hopeful that, aside from some color changes, most things will go back fairly similar to what they were prior to the closure.

Another thought for you. Comparing pre-renovation photos, especially the more recent color ones, with the interior renders, you get the impression that seating is being reduced overall in the Endowment rooms. Before renovation,the seats were just packed in. In some of the rooms, they faced multiple directions because of this. I can't find my source for it right now, but I believe the official number was 220 per room. (that's just off the top of my head, so don't quote me on that!) In the renders the number of seats is greatly lower than that. They face a single direction now, and appear to be around 110-120 in number. Still a significant amount of people, but around half of what it was before. This should make sessions quicker, as there are less people to move around and manage.