This will be my first post on the newly remodeled Ogden Utah Temple.  I want to talk about a few details I liked from the original temple that are still present (in some form).

I want to highlight one detail used throughout the remodeled temple that artistically ties it to the original temple.

I have always liked the Ogden Temple more than the Provo Temple and this is largely because of a small detail.  While the Provo Temple has more detailed precast panels, the Ogden Temple had a decorative metal grille covering the windows.  They look dark in the image to the left, but they did have some metallic variation close up.  They were distinctive and beautiful.  Although the new Ogden Temple doesn't have these metal window coverings, I am delighted to see that the design has been integrated into the remodeled temple. 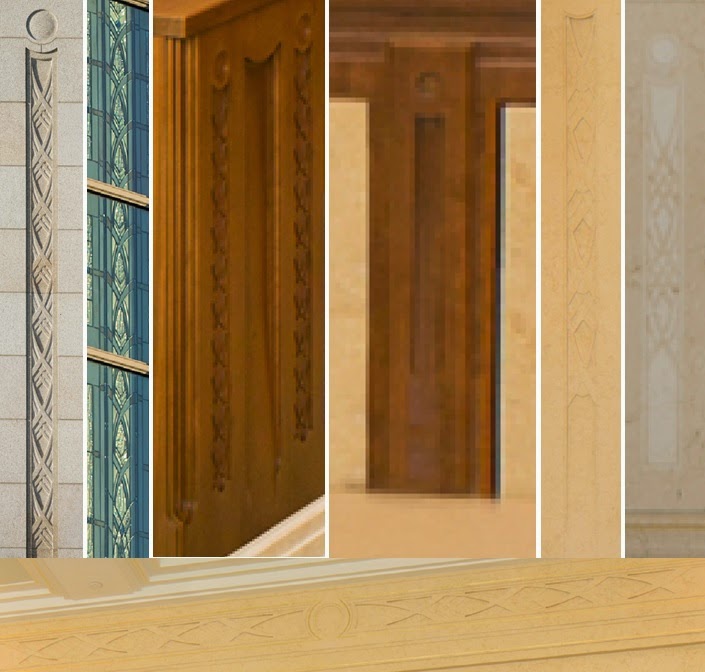 The exterior and interior stonework contains this pattern.  It is also in the stained glass windows.  In the collage I put together from the open house photos you can see on the left that this design is in the stonework. This stonework is on the sides of the windows and on the spire, etc.  The photo one in from the left shows a stained glass detail, which is not exactly the same design, but looks like it is inspired by the original detail.  The next three images show the detail in the ordinance room, first in the woodwork at the end of row of seats, next carved in the woodwork on the altar (I love that the seats and altar are linked so it is like you are symbolically at the altar even when you are in your seat), and then it is also in the stonework on the walls as part of the pilasters.  The photo on the bottom of the collage shows this pattern displayed horizontally carved into the stonework above the altar at the front of the room.  The image on the far right of the collage shows this pattern finely etched into the sealing room altars.  I love that this design detail from the original temple has made it into so many aspects of the remodeled Ogden Utah Temple.  You will also see the pattern in the celestial room dome art glass below.  (Thanks to the reader who pointed this out).

There are two other details that I really liked about the original Ogden Temple than I notice have been included in the remodeled Ogden Temple.  The first is a mural in the lobby of Jesus Christ and Peter, James and John along with Moses and Elijah on the Mount of Transfiguration.  Thankfully this mural is still on display in the remodeled Ogden Temple.  The other detail I loved was that the Celestial Room contained a dome.  The new celestial room has a new dome made of art glass.

The remodeling of the Ogden Temple has significantly upgraded the building.  While so much detail and finery has been added to the temple, I am glad that some connections to the past have also been included.  I hope to write soon about my opinion about the remodeled temple as a whole (and maybe the Ogden Tabernacle and temple grounds).  In the meantime, you can attend the temple open house through the first week of September.
Posted by Scott at 7:17 PM

While visiting the visitor trailer a year ago, I asked the missionary if any of the windows in the spire or just below the spire would allow natural light into the celestial room. He said no.

I believe that dome is back lit with lights like the new dome in the Boise Celestial room. (Hence the even lighting.)

I'm glad to see you posting again. I love the abstract design, too. I'm guessing it represents light or ascension? It's usage over the veil in the instruction room is interesting with a sun disk. It also shows up on the dome. If you adjust the exposure levels on the dome image the etching will pop. The center design on the dome looks very interesting.

One thing I am liking is the art deco styling shown in the Celestial Room. Not sure if it is throughout the temple (will see it Friday). Being that Ogden has a lot of that design, I am a fan.

Glad to see a new post! Here's a confirmation that the dome is lighted with LED lights, not the sun...but I still love it, anyway.

"Light shining through the dome is not from the sun, but LED lights, he said, because the dome is under the spire."

I have updated the post mentioning the design in the celestial room dome and removing the reference to natural light.

Having served for over 15 years in the original Ogden Temple, I found your three postings about the new Ogden Temple, informative, interesting and inspiring. When we moved to Canada in 2004 I had been concerned about the condition of the Temple, with water seepage issues and mold that had been inching it's way in, into the baptistery and all of the basement area of the Temple. Remediation efforts had failed and I knew it was only a matter of time before the Church had to do something with it. A part of me was broken hearted when the original temple was closed and the renovation begun, as I had attended the original dedication, wherein Joseph Fielding Smith, dedicated the Temple. Over the years I continued to return to the Temple, I was endowed there and after my mission I met my Grandfather nearly every morning for the 6am session. I was called to serve as a baptistery worker, then an ordinance worker on group seven, then when group eight formed, I transferred to that group and was one of the supervisors that answered directly to the Temple Presidency. One of my fondest memories was the training meetings that we as supervisors would have with the Temple Presidency and typically with a member of the Quorum of the Twelve and often with one of the First Presidency. It became a highlight of my life. So, when the announcement came that the Temple would be closed and renovated it was one of those times when I felt really a bit sad as what happened inside the Temple was far more important to me than what it looked like outside. I grew to love the building. But water seepage issues needed to be corrected. I am thrilled to know that some of the motifs of the original have been maintained in the stonework, furniture and lighting, as well as on the alters. The new Temple is a masterpiece and I look forward to the day when we can travel to Ogden and attend this Temple once again.