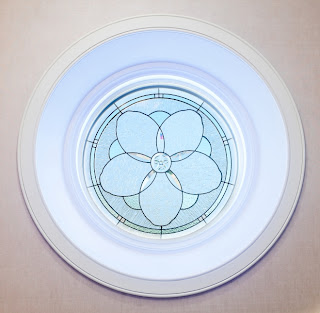 I went to the Brigham City Utah Temple yesterday.  I took some time to photograph the temple and particularly its art glass windows.  If you haven't been, the windows are very beautiful.  They are geometric with the exception of the peach blossom windows.  As I looked at the windows I noticed one detail that appears to be symbolic in ordinary looking windows. 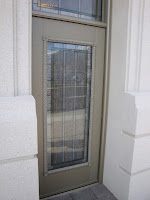 On the first level the windows are all rectangular.  The photo of this door is an example.  Around the edge of the first level windows there is a border that has single small squares every so often. 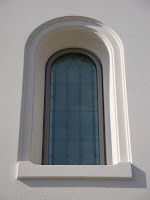 One level up, on the second floor, there are circular peach blossom windows that go into the dressing rooms.  On the towers there are also some arched windows.  This already shows progressed from rectangular windows to arched and circular windows.  Otherwise the windows are very similar in style to the lower level, with one interesting variation - the decorative border glass now has 2 small squares together instead of one.  This is also true on the peach blossom windows. 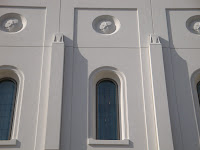 Now go up to the top level of the temple and again you have arched windows with the same geometric art glass.  This time the decorative border glass has (as you've probably already guessed) 3 small squares together.

So what do these squares mean.  Well, this is all speculation on my part, but I'll tell you what I see in it.  First, one, two and three squares probably signify the three heavens or degrees of glory.  Second, having more squares higher up on the temple implies progression.  Third, having 2 squares on the lower part of the main celestial room window and three squares higher up signifies progression in the celestial kingdom with various divisions in it (a similar thing was done in the Oquirrh Mountain Utah Temple using stars).

The one, two, and three theme is not exclusive to the art glass windows in the Brigham City Temple.  If you look carefully at the molding, tile, picture frames, etc. you will see dots used in the same way.  I had noticed this before when I was in a sealing room and thought the temple just used three dots.  Later I was using the restroom on the second level and noticed two dots in the tiles.  I assumed that they couldn't get three dot tile and had just used two dot tile to give the same dot pattern - until I looked closely at the exterior glass and realized that the two dots in the bathroom tile on the second level was probably intentional.

There are some of my thoughts and insights on the Brigham City Temple art glass and on the dot theme used in the temple.  If you would like to add anything, please comment.

Thanks for picking on this simple detail. I would've never caught that one.

I have never been in one of the single story temples. They seem to have a linear layout and I am wondering if they have any similar symbolism as you move horizontally through the temple.

Thanks for all your hard work on this blog, it is amazing. I just stumbled upon it a few days ago and I am having fun and learning a lot as I go through the last four years of posts. (If it is ok I linked your blog on mine.) Keep up the good work, you really have something special here.

I too want to thank you for writing this blog, it is amazing! I am recently endowed and have lots of questions, so you are helping to answer some of them, and opening my eyes to understanding symbolism (which I have a hard time seeing on my own). So cool! Thank you :)

Excellent work on the Brigham City art glass as usual; was wondering what your thoughts were on the Meridian Idaho design:

Also, it's about a year later, but I'm glad your "where will the next temple in Utah be" speculation on Cedar City was right. ;)

Did you see this site yet? http://ldssymbols.com/